It’s hard to imagine a ski vacation in the French Alps without the famous tartiflette. Yet this dish only originated in the 1980s.

WINTERTIME GIRDLE-BUSTER
Tartiflette is not a dish for dieters. Made with potatoes, bacon, cream, onions, white wine and an entire Reblochon cheese, it is hearty, substantial and extremely caloric. A perfect way to warm up after a day out on the slopes, but equally delightful after a day of Christmas shopping. Albeit, in a slightly less girdle-busting variation, such as the one here. Instead of using an entire cheese, I only used half a small one (the cheese can weigh between 240-550g).
Though tartiflette is based on a traditional potato dish from the Haute-Savoie known as péla and made with a potato called tartiflâ (hence the name), it was first made in the 1980s as a way to promote Reblochon cheese. Today it is known the world over as one of the top French wintertime dishes.

REBLOCHON
Reblochon is a soft mountain cheese from the Savoie. Its name comes from the word reblocher, which means ‘to squeeze the utter again’. The cheese is made with raw milk from the second milking of three different cow breeds (Abondance, Montbéliard or Tarine) and has a 45% fat content. Its washed rind has a light yellowish color. The cheese has an earthy aroma and nutty taste.

SLIGHTLY LIGHTER VERSION…. STILL TRADITIONAL
This recipe can hardly be called traditional (I did scale it down somewhat for the sake of my thighs and our arteries). Nevertheless it is made according to the traditional method (which I observed a French grandfather make once in Haute-Savoie) and truly delicious. Should you wish to be 100% authentic, simply double the amounts of cream, bacon and cheese. And go for a very long run the following day…
Bon appétit!

Instructions:
Preheat the oven to 200C and rub a 27 x 20cm oval dish with the garlic (finely slice the rest). Grease the dish with a little olive oil. Boil the potatoes in salted water for 10 minutes or so, depending on their size, until half cooked. Drain and set aside. In the meantime, melt the butter and soften the onions. After five minutes, add the bacon and cook for another 5 minutes. Add the remaining garlic at the very end. Cut the potatoes into medium slices. To assemble the dish, place half of the potatoes in the dish and season generously with nutmeg and pepper. Top with the onions and bacon and a tablespoon of crème fraîche. Cover with the rest of the potatoes and the remaining tablespoon of crème fraîche. Season again with pepper and nutmeg. Pour the wine over the dish. Slice the cheese down the middle in half, so that you end up with two circles. Then slice in 4. Top the dish with the cheese, crust side up. Bake for 25-30 minutes until the potatoes are fully cooked and the dish is bubbling. Serve with a green salad.
EDIT: I made the dish a few days later again and this time I diced the cheese and distributed it over the dish. Worked much better than with the cheese cut into four larger pieces. 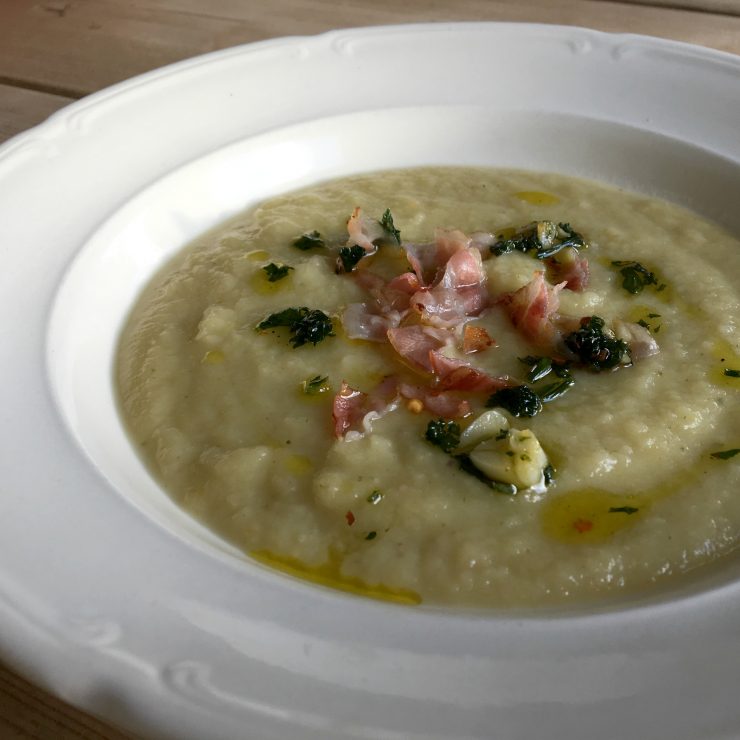